What is Orbital Welding?

Orbital welding is the automatic welding of tubes or pipe in-place with a rotating tungsten electrode. Orbital welding equipment using the Gas Tungsten Arc Welding (GTAW) process can be used for simple fusion welding, and with the addition of filler wire.

Orbital tube welding was developed in the 1950s, replacing compression fittings and manual welds in the aerospace industry. Technological advancements have made programming and operation simple. Enclosed weld heads can operate on diameters 0.125” (3mm) up to 6 “ (168.3mm), and open weld heads using interchangeable guide rings can mount on a pipe of any diameter. 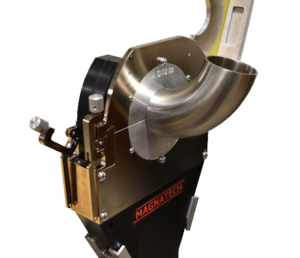 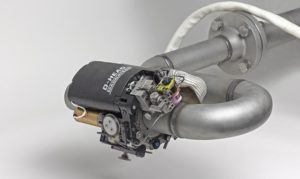 The lack of skilled workers and increasingly stringent welding codes have left mechanical contractors, fabricators and manufacturers searching for the solutions that orbital welding provides.

Unlike manual welding, the orbital welding process produces welds that meet industry code acceptance criteria. Consistent bead size and full penetration create smooth surfaces that prevent microbiological growth and possible contamination of the product, a requirement of ASME BPE. Multipass welds with the addition of added filler wire will meet the rigorous pressure and process pipe codes of B31.1 and B31.3.

An orbital fusion weld head creates a sterile, enclosed environment for a tube weld. With proper purging techniques, the discoloration associated with oxidation of stainless and high-nickel alloy is easily prevented.

Orbital welders are ideal for applications where the tube or pipe cannot be rotated, have poor arc visibility, or are located in a hard to reach place. The automated welding process will improve operator comfort and safety, eliminating repetitive motion injuries.

Many industry studies have found that a manual welder averages a 30% “arc on” time. Orbital welding equipment can average a 75-80% efficiency; as it eliminates the fatigue factor.

The orbital welding power supply can manage and print weld schedules to keep accurate and complete documentation of welds.

If you don’t see your specific application, please call (860) 653-2573 to talk to an orbital welding specialist to investigate solutions. 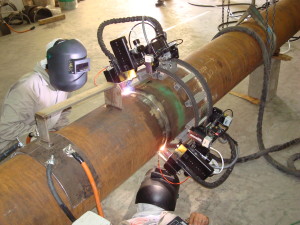 Many gas fields contain dangerous levels of hydrogen sulfide gas – odorless, colorless, toxic and corrosive.  The Shah gas reservoir in Abu Dhabi contains 23% of the gas, as well as 10% CO2 requiring corrosion resistant piping from the well head to a processing facility.

One solution to transporting so called “sour” gas is to use standard steel piping internally lined with a corrosion resistant alloy (CRA).  This is usually Inconel 625 alloy (NiCrMo-3).  The pipe can be lined with a tube of this material which is inserted into the id and mechanically expanded.  Alternately, the id can be clad with a weld overlay.

It is imperative that root and hot pass do not melt any steel and dilute the continuous CRA clad surface.  The GTAW process is always used.

The contractor Punj Lloyd was awarded the welding project of welding hundreds of 16” and 24” selected the Magnatech T Model system with Pipemaster 516 Controllers.

Precision machining of the pipe end is required to create a “J” prep, where the land extension and Root face is cut into the Inconel clad layer, and does not include any carbon steel.  Two T-Heads were used on a single Guide Ring.  The ID required argon purging and a required interpass temperature of 177⁰C was maintained.

Unlike conventional carbon steel welding, CRA welding has certain unique features.  The joints need to be verified for traces of residual magnetism created by the cladding process.  If it is present, then demagnetization is mandatory.  The joints require thorough cleaning with lint-free cloth wet with acetone.  The fit-up process used special internal clamps with a back purging capability.  Throughout the welding process, back purging was maintained and a required limit on oxygen content less than 500 ppm was monitored with portable oxygen analyzers.  The root pass weld bead was inspected by videoscopy and the bead profile inspected by a Laser Optical Profile Measurement tool.  Defects were well under 1%.

Twenty four weld systems were used to double joint pipe in a yard for transportation to the work site. 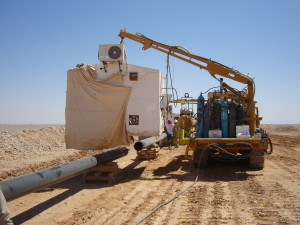 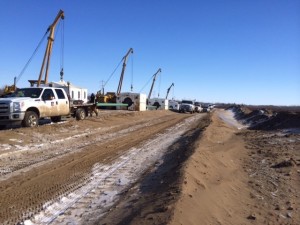 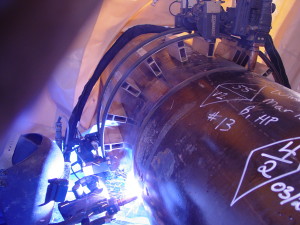 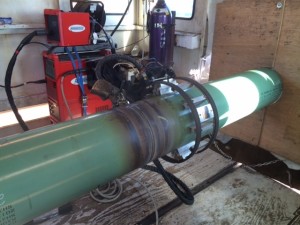 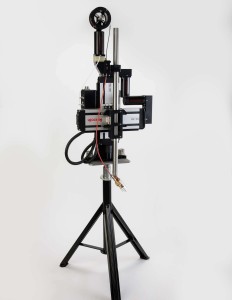 Main Steam Isolation Valves (MSIV) are used to throttle the steam flowing into a steam turbine generator.  These massive valves are critical for safety, and must close within seconds in the event of a steam line break.  They also allow maintenance to be performed on the steam turbines.

Over time, the valve seats degrade due to thermal stresses, corrosion and other factors.  These massive valves cannot be simply removed for maintenance in a workshop.  They must be reworked in-situ.  The valve actuator is removed, along with the top of the valve body.  The valve seat is located 4-6’ below.  A fixture is mounted on the top of the valve.  This locates the machining tool precisely to machine out the original valve seat, which is usually stellite material.

The machining tool is removed, and a weld overlay system mounted on the precision fixture.  An overlay of Inconel 625 material is made which requires repetitive overlapping passes, and a number of layers.  A video camera allows the operator to view the weld area.  The valve seat area is shaped like the “bell” on a trumpet. The torch can be quickly angled to keep it 90 to the valve body, as it moves from bottom to top of this “bell” (see photo.)  The welding Head is designed so that the function of the Arc Voltage Control and torch cross seam adjustment slides can be interchanged with a switch on the Head.

Following sufficient weld buildup, the weld Head is removed, and the machining tool reinstalled to cut the weld buildup into the precise geometry of a new valve seat.

What began as a request to improve existing equipment, turned into replacing most of the system. The contractor had already replaced power sources from